On Friday, 28th July 2017, a sell-out crowd of 350 athletes participated in the Dub Runner’s Giants Trail Race. This was the third running of the event made famous by the monsoon conditions of first race in 2015. Despite the looming threat of rain for most of the evening, our latest race managed to pass off without any downpours!

Brian Grimes, Chair of the Dub Runners, speaking at the prize giving, was delighted with how the event went: “A fantastic turnout this evening as we managed to sell out our extended 350 places shows how great a race this is. We got lucky for a second year with the weather providing favourable conditions for all 329 finishers of the race. For a third year, we were delighted to welcome along Pure Running who not only supported (and ran) the race, but also provided the prizes for the top three finishers. Following on from feedback from the field, we introduced chip timing to the event, and had ChampionChip on hand providing updates on the field as they crossed the line. This year the men’s race was won by new winner Mark McKinstry who set a new course record by eight seconds in a time of 33:45. The woman’s race has a new champion too, Sarahjane Guiney smashed the female course record by 47 seconds coming home in 41:09.  Sarahjane lead home a string of Albertvillle Harriers who made the race one of their championship events.” 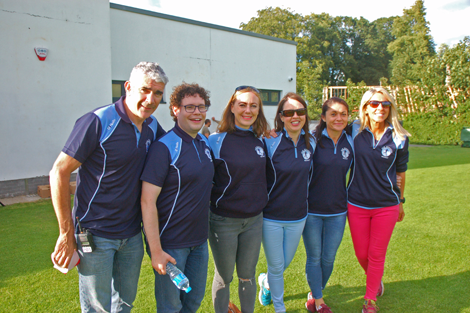 Some of the Giant’s Trail Race 2017 Committee Members!

A night like this requires months of organisation and the team would like to also thank all the Dub Runners club members who helped out marshalling the course (there were over 40 out on the route), those who helped provide, run and clear the hospitality area.  A word of thanks to Antoinette and the staff at the Dub Pavilion and Playing Fields who not only provided the facilities, but were on hand with support at a moment’s notice.

Check out the full results and image gallery in our Giant’s Trail Race 2017 mini-site!