He’s new, but he is also lightning fast!  Meet our tenth All Star – Alastair!

When did you start running?
I did the odd 5k and 10k here and there when I played football and GAA with my hometown clubs back in the oh so beautiful hills of Donegal. I also played a bit of ball for the Dub Runners neighbours Queens Grads when I moved up to the bright lights of Belfast in 2013. I always liked the fitness and pre-season running drills which teammates used to hate.

Why did you start running?
I took up running properly in 2018 after I recovered from having my anterior cruciate ligament in my right knee reconstructed for the second time. It became clear my knees didn’t like the twisting and turning involved in football so I decided to give running in straight lines a go! 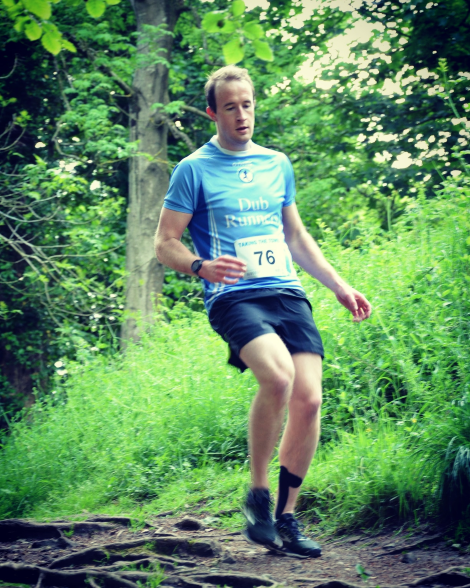 Alastair taking the tower in 2019!

What is your favourite Dub training session?
In the summer it is hard to beat the giant’s trail route on a nice evening. Then there is something rewarding about a good hard session at the Mary Peters track on a cold winters night!

What has been your favourite race(s) to take part in?
Would have to be the London marathon with the Dub Runners crew in 2019. The atmosphere was unbelievable and post marathon celebrations with the gang weren’t bad either! The Point 10k down home would be another favourite, a beautiful coastal route.

What are you running goals?
Run more races and just chip away at my PBs each year. I set myself the target of a sub 18 minute 5k at the start of the year, lets see how that one plays out! I’d also like to give cross country and fell running a go.

Tell us something random about yourself that people might not know!
I was once lucky enough to visit two of the seven wonders of the world within a week.