From the rugby field to the running track meet John our newest All Star!

When did you start running?
I started running after rugby training sessions for Instonians in 2002 as I felt I wanted to get a bit fitter. After a couple of Lisburn half marathons I decided to try the Belfast Marathon in 2005. I didn’t do anywhere near enough training and hit the wall at 20 miles at Holywood on the old course and walked/ran to the finish at the Odyessy. I didn’t run again until May 2018 as one of my friends had just done the London marathon and if I’m honest, I wanted to beat his time and also avenge my Belfast experience!!

Why did you start running?
As fellow prop forward Jason Leonard said when asked what he wanted to do after he had retired from rugby, he said he wanted to get fit!! Certainly after the last few years of not really playing and training enough at rugby, I could certainly share the sentiment though I haven’t officially retired yet!! With a young family I wanted to keep fit at a sport that I could fit in around work and family life and give me the head space that I needed. I’ve found running with the Dubs a brilliant way to get fit, improve and meet like-minded people.

What is a typical training week for you?
Currently rehabbing from an Achilles injury I’m building up from 3 shorter runs a week and recovery cycles in between. Typically though it’s the Dub training sessions on Tues and Thurs and the longer run on a Sunday with usually some sort of a 16 week marathon training plan going on in the background! I certainly enjoy getting out for lunchtime runs when I can.

What is your favourite Dub training session?
I enjoy the Tuesday sessions as I enjoy the variety of the speed work that we do and would find it a lot harder to do on my own without the support of the club. I also enjoy when we train on the GTR route as I used to live in Edenderry and remember my children and I would help pass out the water and sweets to the runners in the GTR race, though most of the sweets ended up being eaten by the children! 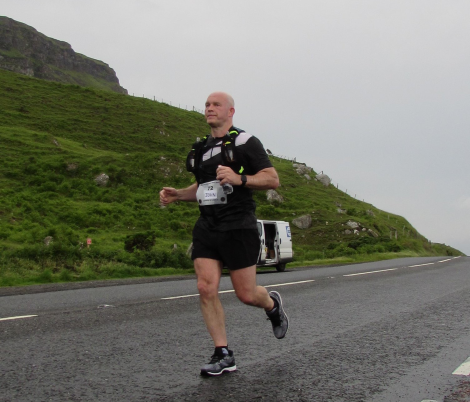 What has been your favourite race(s) to take part in?
I’ve probably enjoyed the marathons I’ve done in the last couple of years best. The best one for me was the Walled City Marathon which I found tough but the support at the last quarter coming over the Peace Bridge and the noise of supporters cheering at Free Derry Corner and Fahan Street was amazing. The Dublin marathon was a close second as it was amazing being part of such a huge event and again the crowd support all the way round was amazing. Any EAMS event is also up there as they are an amazingly friendly and inspirational group.

What are your running goals?
My running goals are mainly to keep enjoying it and hopefully to be able to get back to doing more running and eventually marathons. Further out, I’d love to do the Causeway Coast marathon, the Tollymore Trail marathon and London and maybe try an ultra and triathlon. Also see if I can work on my times a bit along the way.

Tell us something random about yourself that people might not know?
After university I worked in Hong Kong for a year and my rugby went well and I ended up representing Hong Kong at the Arafura games in Darwin in Australia which was like a South-East Asia commonwealth games. On our off days we swam in waterfalls in the National Parks and went out shark fishing!! An amazing experience that I’ll never forget and I think I’ve still got some of the kit!