Friends introduced him to the Dubs, now he’s got the running bug – meet Peter!

When did you start running?
There was no real lightbulb moment for me starting running. I regularly attended the Stranmillis College circuits class and there were a lot of the dub runners at it. I got speaking to a few of them as far back as 2010 and they said theywere doing the Belfast marathon that year. A number off other people I knew were doing it that year as well, so I started training with Eamonn McKeever (another Dub) in Jan 2010 and managed to run the full thing on the day in 4.00hrs flat. I stopped runningafter that for a few years until Ryan Love convinced me to run Amsterdam Marathon in 2015 and to join the club after it in Oct 2015.

Why did you start running?
I was getting bored of the monotony of doing circuits and gym work all the time and prefer the outdoors, so when I eventually took to running properly in 2015 after the Amsterdam Marathon. I say properly after a marathon as it wasn’t agreat run for me, I didn’t do myself justice and had a point to prove almost, plus I felt better for being outdoors and in a more social setting, so it was beneficial in a number of ways. Also keeps the weight down.

What is a typical training week for you?
A typical weeks training normally is Monday night circuits at Stranmillis college, Tuesday Dubs for speed work, Wednesday circuits, Thursday long Run with the dubs and then either park run or resistance work on a sat morning. During lockdownive put together a circuit that can be done in the house or garden and which is quite good to rebuild muscles after an injury – 10 reps of Bicep Curls, Shoulder Press & Squats x 4 reps (I use a 9kg dumbbell) then 10 lateral raises & 10 lunges each leg x 4reps (5-6kg Dumbbell), 10 uptight rows & 10 sit ups x 4 reps (5-6kg Dumbbell), 10 forward raises & 30 second plank x 4 reps (5-6kg Dumbbell), 4 x 15 tricep dips, 4 x 10 back extensions, 4 x 10 supermans, 4 x 10 side lunges each leg, 4 x 10 pressups and thenfinish with 4 x 30 second abdominal hold. Takes about 35 mins but definitely does help and can be done in your own home. 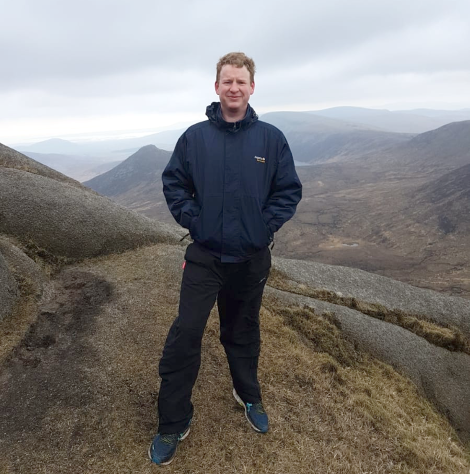 Pete on top of the world!

What is your favourite Dub training session?
Summer fartlek on the towpath, it feels like you really work during that 40 mins, always feel good after it. I actually like the harberton laps in the winter.

What has been your favourite race(s) to take part in?
I really like the dundrum 8 miler and have had a couple of good runs there. Also it seems to go in really quickly as the course is so varied, the beers after always help.

What are you running goals?
I wouldn’t say I have any goals, ive been injured lately so to get back would be enough for me and just enjoy it, not so worried about races or times, just to be running and enjoying the outdoors.

Tell us something random about yourself that people might not know!
I used to try and duck out of cross country in school and took over 10 mins to run a mile in it cause I hated running so much in my teens!